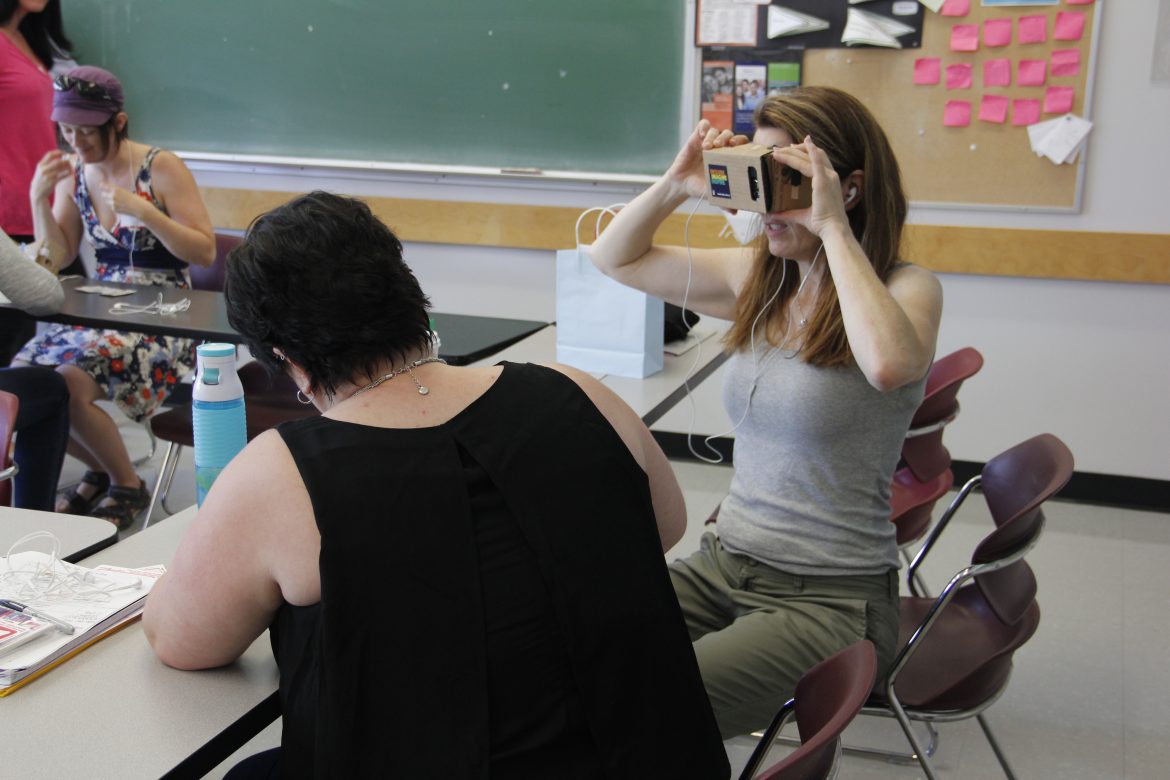 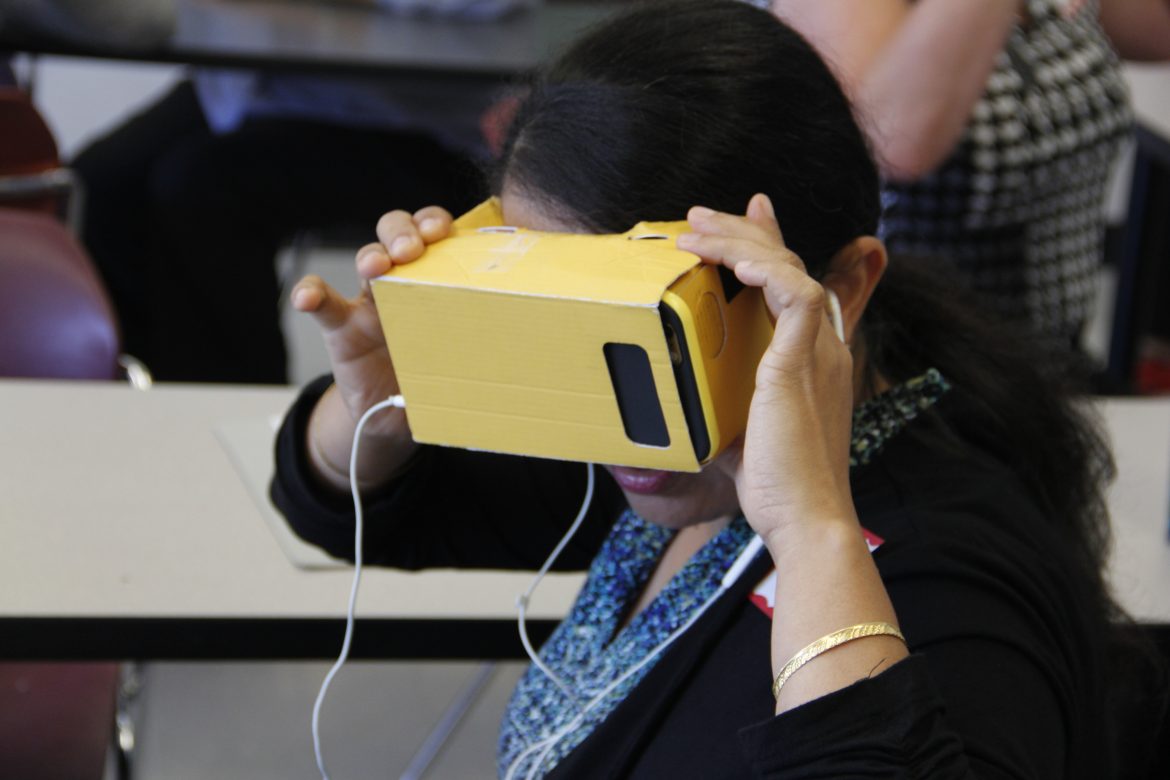 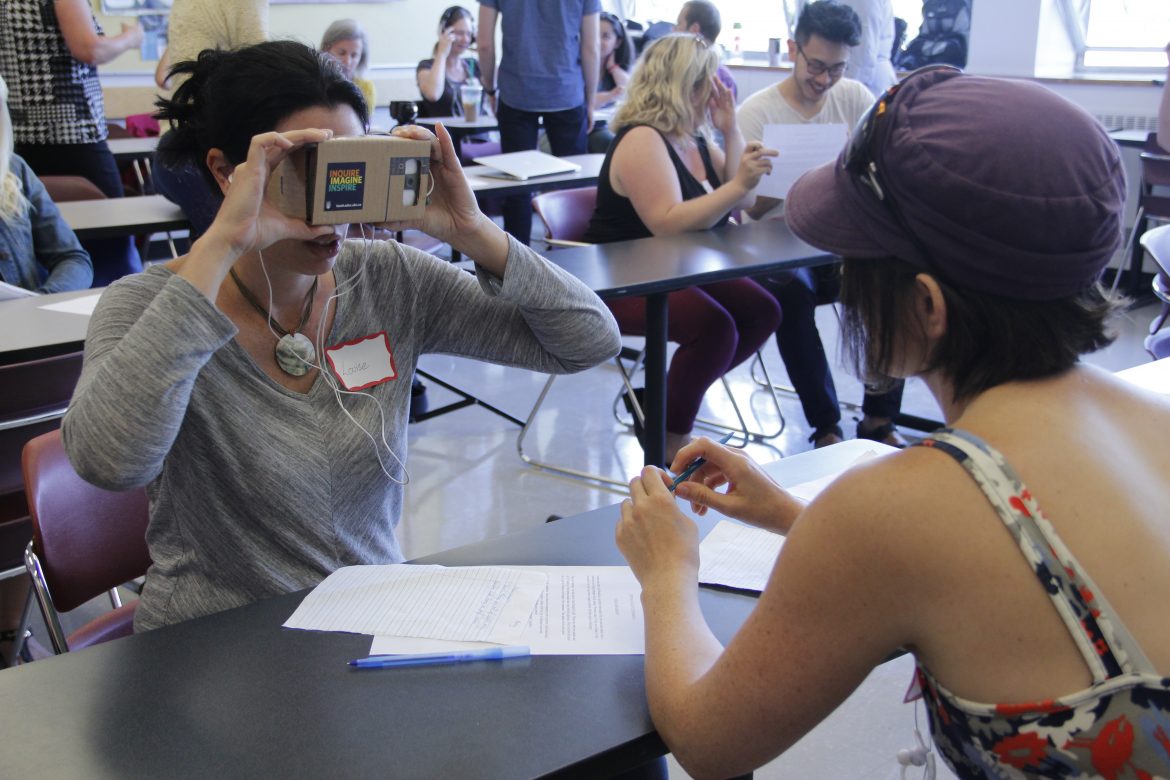 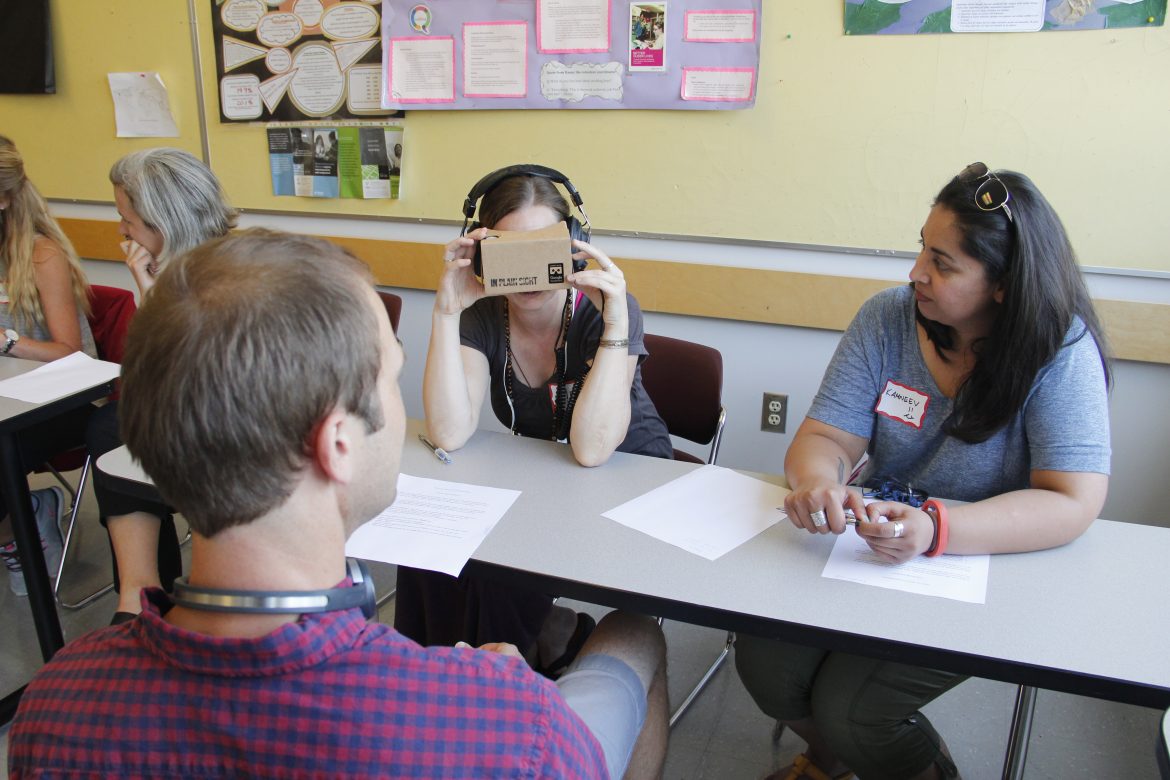 Teacher Candidates worked in pairs or groups to analyze the experience. 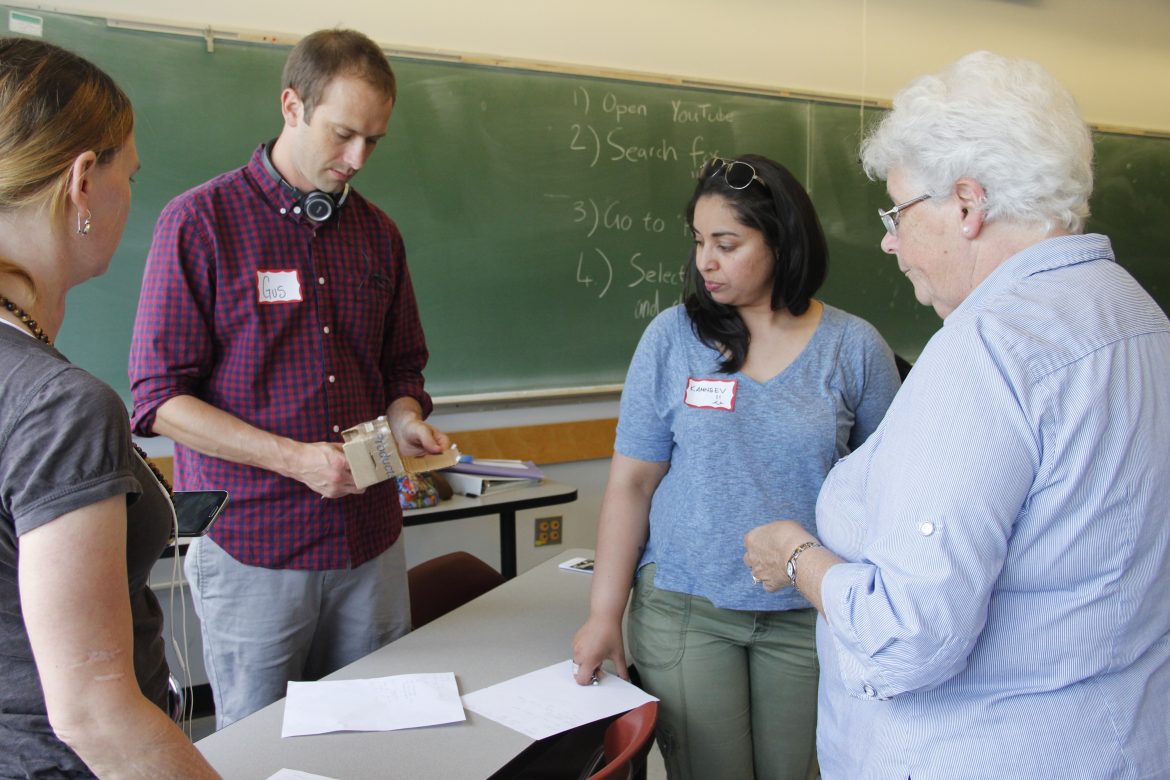 Dr. Elizabeth Jordan and her students. 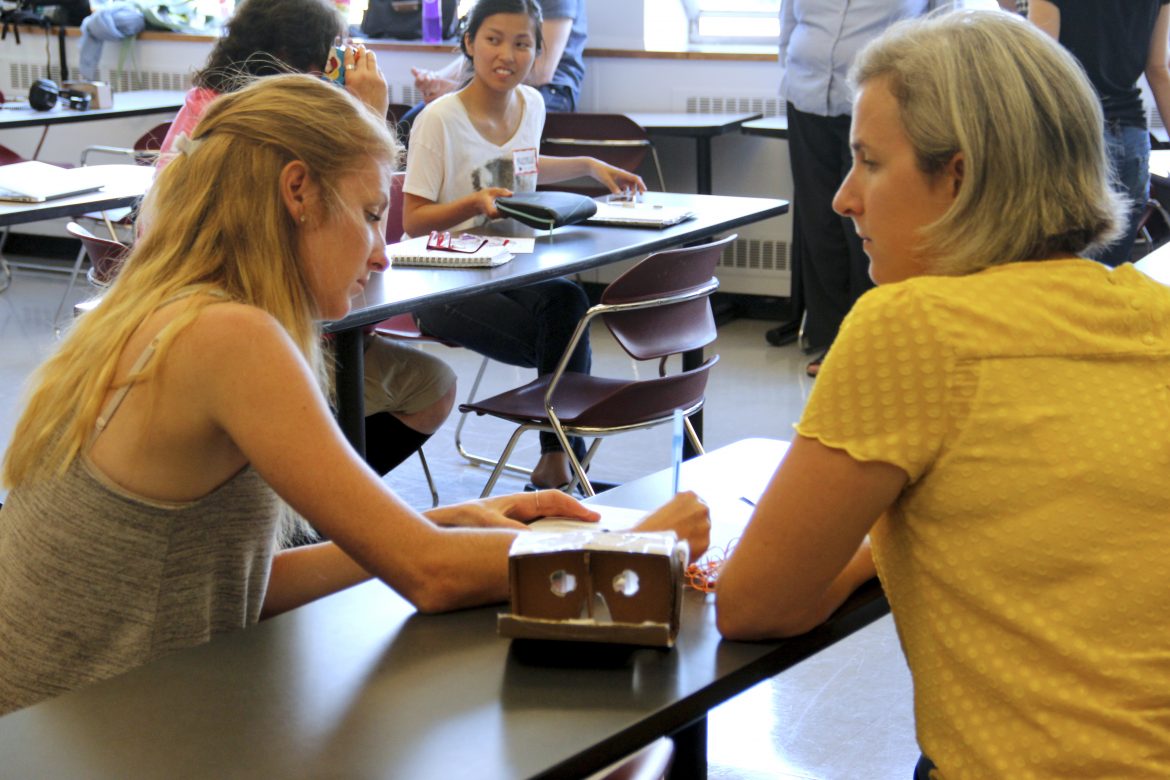 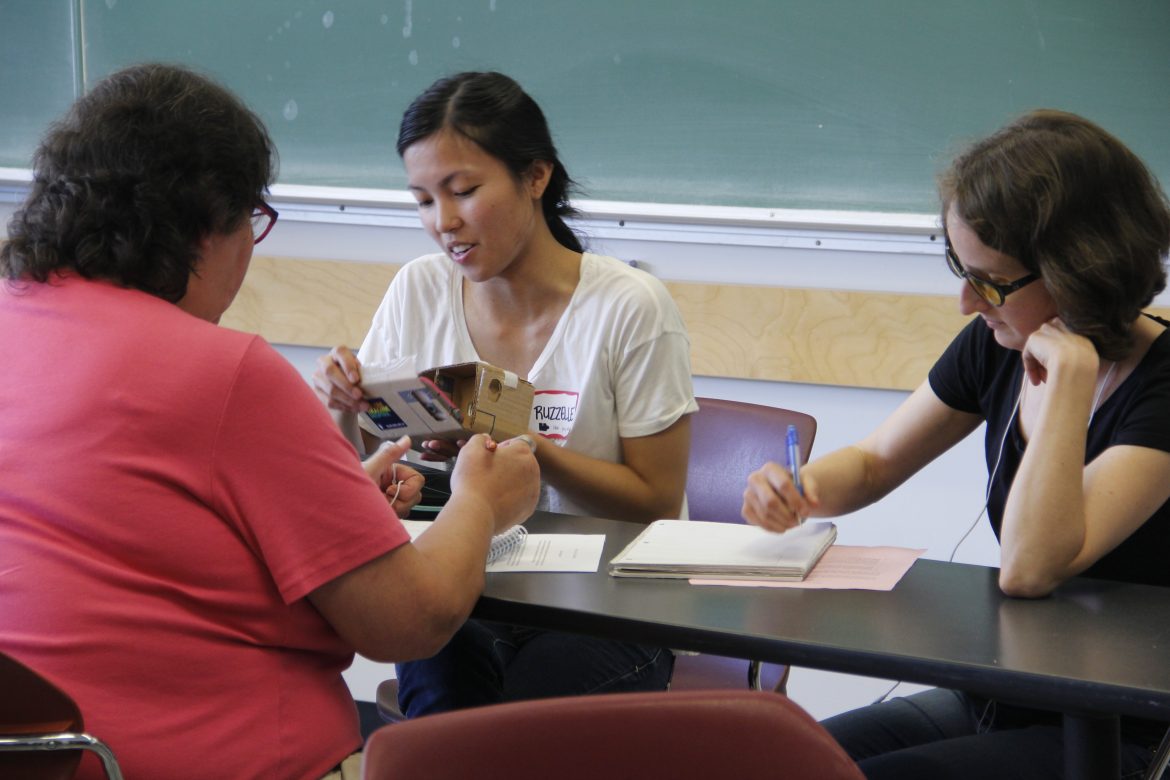 The presence of Virtual Reality is undoubtedly on the rise. Examples of this futuristic technology making its way into our lives are all around us: the popularity of both high-tech and “DIY” VR headsets, YouTube and Facebook supporting of 360 degree video as of 2015, and of course, there is the unavoidable Pokémon Go app that has virtual monsters popping up all over our globe.

Last year, ETS explored Virtual Reality in a blog post that featured the Oculus Rift and other technologies with their potential educational purposes. This dive into the future of VR outlined the possibilities of this new and upcoming dimension. Now, 2016 has brought a new VR development— this technology is being applied to teaching and learning in the Faculty of Education.

What is Virtual Reality, and Why is it Significant?

Virtual Reality allows users to be completely immersed in a computer-simulated, heavily sensory world. This alternate place can be created through either recording live footage with a 360 degree camera, or programming a computer generated environment.

In either case, opportunities for learning have been cited and are being actively explored. Educators can consider the potential for VR to take student on virtual tours, better understand the flexibility of narrative structure, create an increased engagement with school curriculum, or even immerse students in a unique point of view that they would not be able to understand otherwise.

With this in mind, ETS supported and collaborated with ECPS Instructor Dr. Elizabeth Jordan in the introduction of educational virtual reality in her classroom. EPSE 312: Introduction to the Study of Exceptional Children, was chosen as the course to explore this technology. This implementation aimed to recreate visual differences, allow students to experience the unique challenges that students with visual impairments may face in their future classrooms, and have them consider how they can accommodate these challenges better through their own virtual-reality-enhanced understanding.

Development of a 360 Degree World

VR footage was recording using 360 degree camera in multiple everyday environments, such as at a coffee shop, going up or down stairs, or crossing the street. Then, eight pairs of Google Cardboard Headsets were fitted with unique lenses that aimed to simulate five different visual impairments: hemianopsia, glaucoma, macular degeneration, diabetic retinopathy, and cataracts. On July 18th, the visually-altered headsets were then brought to the EPSE 312 classroom for Teacher Candidates to view these everyday scenarios with a new point of view.

Virtual Reality in the Classroom

Students rotated around the class, where each new station offered a chance for Teacher Candidates to enter the virtual world and experience what it might be like to live with a visual impairment. Students used the headsets to freely look around the simulated environment, and try to place themselves in the world while also understand the impairment that they were experiencing.

Those who explored the virtual reality shared their thoughts on the experience as they looked through the lenses. Highlighting the positive elements of this technology, students noted that generally, the virtual reality lenses had an intense disorienting effect, though that this attested to the accurate and effective portrayal of the impairments. They explained how they were able to overlook that they were staring into a simple cardboard headset, as this accessible technology was able to provide a real enough simulation. What was possibly the most exciting for the students was that unlike understanding the impairments only through textbooks or pictures, the virtual reality experience completely immerses the viewer into another person’s point of view unlike any other demonstration. At the same time, students identified aspects of the virtual reality that could be improved upon, such as their difficulties in determining if the visual distortion was accurately representing the impairment.

When asked to consider potential applications for 360 degree video in their future classrooms, Teacher Candidates could picture this technology fitting into their classes. They could see VR offering the experience of stepping into the point of view of someone with a visual impairment, or introducing their students to other new experiences and ideas. They also speculated how in the future, virtual reality could be part of an online classroom through the ease of developing one’s own Google Cardboard headset. More developments could also be made in creating goal-driven footage to increase the realism of the experience, or adjusting the form of the headset itself.

After facilitating the VR demonstrations, Dr. Elizabeth Jordan offered her insight into the development and implementation of this media in her course.

“I thought it went really, really well. [The students] talked about it. I didn’t see anybody negative. Not one negative comment. The comments that they had I thought were right on the spot.

It was when I came down to talk to Sharon [Hu] about something else and she said something about VR and said ‘Let me show you what it is’ and I went ‘Oh, yeah!’ So it wasn’t part of the planned course, I juggled my course around.”

Once Dr. Jordan had made the plans to incorporate the technology, she admits that she saw its potential right away.

“I thought it would go over really big, to be honest. There were a couple of students who made comments, how really great it was […] It’s one thing to talk about something, it’s a totally different thing to experience it.”

She also reflected on the possibilities of making Virtual Reality part of a curriculum, and where she sees room for the growth of educational VR in the future.

[The students] knew it was part of the curriculum because the first day I told them about it. And actually they were quite excited to try it […] everybody was there, everybody was on time as possible.

I’m not quite sure how we could do this, but it would be really nice to be in the middle of a classroom, and that brings up all kinds of other issues in terms of permissions and all kinds of other stuff. I think there’s all kinds of other places where you could use it. For example, with behaviour issues. So you could see it from the teacher’s perspective. Because up until this point all we’ve had is a video.

Dr. Jordan offered her recommendations for instructors who are considering using VR in their own classrooms.

“[Virtual Reality] has uses. I think you just have to really think it through. I think you have to plan around that. Not so much that you’re changing what you do, but how you do it. Your approach.

First of all you needs more units. I really think people would be much happier to have their own cellphone right there… So, they need to have enough of those.

I used a worksheet with [this activity]. It has to have very specific guidelines around what it is that you’re doing with it…. it doesn’t mean necessarily that you have to have that beforehand but maybe have them do the Virtual Reality and then have them go on to a series of directed questions. What did you see? What were your observations? And so forth. Maybe have them go and do it twice. Answer these questions and then go back and have another look at it, now that you’re keener for what to look for. Did you notice such and such?”

In the same way, Dr. Jordan offered some considerations for Teacher Candidates who are interested in using this technology in their practice.

“I think that’s the important part. How could I translate that into my own work? I was really impressed with what [one of the students] had said: Wouldn’t it be great to walk through a battlefield with that camera? You could talk about social studies, you could talk about history, and have them experience that same immersion […] it would be so powerful you’d have to be careful how you’d use it.

I guess the big thing right now is trying to get things with a classrooms focus. But again, that can be so difficult with permission and privacy issues […] But I can see it being used for even hearing impairment. Because then you could have the hearing impairment, and have this kid sitting doing his work, but not have any idea of what’s going on around him in terms of sound. There was also the things with the vision, of showing the room as it is with 20/20 vision, and then sliding into the other one […] I see all these little places where it could be used.”

Lastly, Dr. Jordan closed with her final impressions of this evolving learning technology.

“I think it has a lot of potential. Really, a lot of potential. I think it’s just a matter of figuring out where it will work, and how you’re going to do it so that it becomes an integral part of the class, not an add on. It has to be part of what you do. Otherwise, it becomes ‘Here, we’re just going to do this today, and isn’t this fun, and then we’re going to move on to something else’. It’s got to be incorporated. This is what I told my students- I said, the only drawback you can have is your own imagination with this.”

Thank you to Elizabeth Jordan and the students of EPSE 312 for participating and engaging with this technology. We look forward to further exploration of Virtual Reality in the classroom and of how this immersive learning can enhance our understanding and our education.