Inspired by contemporary research on games in education, we proposed to gamify an existing online fourth-year undergraduate course on adult education. The model for this transformation was Jane McGonigal’s online game Urgent Evoke, a Crash Course in Changing the World. Urgent Evoke was an alternate reality game that used the real world as the platform, and its storyline was based on real-life problems. In Urgent Evoke, players earned points by taking on the role of agents. They completed a mission and quests every week for ten weeks by taking part in real-life activities. Between March and May 2010, over 19,000 people from over 150 countries played this game, and completed thousands of tasks (Gaible & Dabla, 2010). This means that a game has the power to motivate impactful positive actions in the real world and encourage people to combat serious problems.

ADHE 412: An Overview of Adult Education explores adult education theory and practice in Canada and the world. It is a core course in the Adult & Higher Education Diploma and an approved elective course for several programs. It is of interest to people who facilitate adult learning or practice adult education in a broad array of formal, non-formal and informal settings. As a result, it appeals to community workers, trainers in business and industry educators working in hospitals, prisons, churches, farms or factories, those contemplating doing development work overseas, community college employees, school teachers contemplating a career in adult education or anyone thinking of entering a university graduate program in adult education.

The organization of the course in ten different topics and the evaluation strategy, which allows students to choose the focus of their assignments, fit well into the game design that we had in mind.

The overarching goal was to foster good learning through a game (Squire, 2013). Three critical criteria were identified for the gamified course. It needed to:

Since there was no expertise in the course development team, a graduate student game designer was hired to assist with building the game space. Consultations and brainstorming lasted for a few weeks, with continual reference to the identified three criteria throughout. The final result was a fictional newspaper called Adult Educator Weekly.

Students took on the dual roles of a reporter and a reader in Adult Educator Weekly. As reporters, they had to choose to report on three out of ten topics. The “journal articles” were made public and read by everyone in the class. As readers, the students reviewed the articles and posted their comments. They also cast their votes for the best written article of the week. At the end of the course, the articles with the highest number of votes were published in the final edition of the newspaper. The instructor took the role of an editor in chief who gave the reporters their weekly assignments.

The course was redesigned using WordPress (UBC blog) platform. The reason for choosing a blog platform for the new course was two-fold: 1) a lot of newspapers use blogs for their online presence so Adult Educator Weekly looked “more real”, and 2) the communication between the “reporters” and “readers” seemed more natural, than to use a discussion forum inside an LMS (Learning Management System).

The innovation in design and approach to student learning situated part of the course in a gamespace. The game concepts— competition (Caillois, 1961), teamwork, weekly challenges that test skills and knowledge, use of creativity, imagination and collaboration to solve a common task (Szulborski, 2005; Zimmerman, 2004), public votes, and symbolic prizes (points) (Gee, 2007) — have created engaging online interaction.

This new type of student engagement through gameplay has opened the possibilities for different, more collaborative networking and constructivist learning and teaching. As compared to other initiatives across campus with the goal of implementing games in education that focus on developing a high-tech gaming platform or machines for virtual worlds building, this project heavily relied on already existing social media tools that many students were familiar with or that did not require a steep learning curve. The use of these tools made the game design sustainable, scalable and re-usable. The intention of the project was to select the optimal platform, customize it and adjust to our needs and create a solution that did not require additional sources of funding or unaffordable resources.

Over time, as the course has been offered every term in at least one section, the instructor has became more familiar with the affordances of the platform and the need for tech support has decreased. Based on the good feedback from students, another course in the same Department was redesigned in a similar way.

[T]he dialogue that I see everybody creating, sort of as a learning community, is one of the most rewarding aspects of this course and this gamified environment.

… even in cases they felt a little uncomfortable maybe at the beginning, with maybe being a little unstructured, maybe having too much freedom, by the end of the course, they really thought that it was the best way and they learned more that way. Having to take charge of their own learning was very empowering to them.

[The ability to structure your own learning] gave you some sense of agency… And that was really motivating to feel like I was in charge of my own learning.

I was a little bit outside of my comfort zone for a brief moment […] But once I got used to it, and adapted to the idea that I’m not necessarily playing someone else – I’m just changing the capacity that I’m presenting my work in, […] that reinforced my ability to do other things, rather than just be a student presenting in a completely structured way. 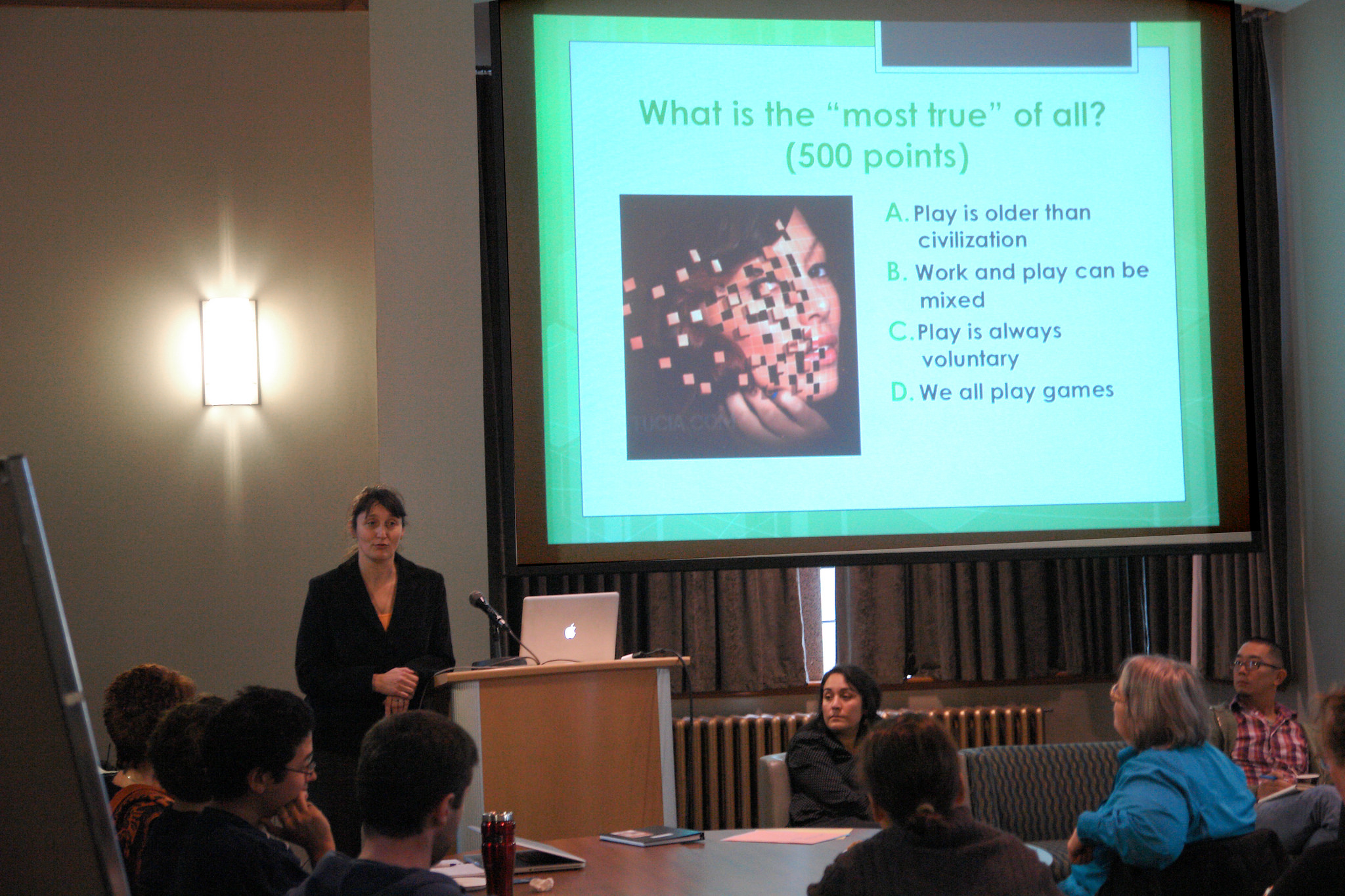